Chu Van An was a confucian scholar and educator under feudal society. But he had many valuable contributions for future generations of the nation.

Chu Van An was born in 1292, and died in 1370. He was also called Chu An. He lived in Thinh Liet commune, Thanh Đam district, which now belongs to Thanh Tri, Ha Noi. When he was young, he was renowned for being full of integrity and righteousness and he only stayed at home to read books and teach.

Chu Van An was a famous confucian scholar and a great teacher under the Tran dynasty.  King Tran Minh Tong (1314-1329) invited him to the Capital to instruct Crown Prince Tran Vuong (who later became King Tran Hien Tong) and appointed him as Tư Nghiep of Quoc Tu Giam (Director of Quoc Tu Giam), looking after the training in Quoc Tu Giam. During the reign of King Tran Du Tong, the court was in disarray; mandarins abused their power. He submitted a petition recommending seven bad mandarins to be killed. Unfortunately, the King did not reply to his petition. Chu Van An then resigned and lived in seclusion in Kiet Đac hill of Chi Linh district, Hai Duong province. Later, King Tran Nghe Tong invited him to the Capital to work as a mandarin and help the king in governing the country. But he only went to the court to congratulate the king and returned home. In 1370 he died at the age of 79. King Tran Nghe Tong decreed that Chu Van An be honoured in Van Mieu

Chu Van An wrote Tứ thư thuyết ước a textbook for students plus 10 other books. Unfortunately, these books cannot be found today.  In his education activity Chu Van An tried his best to introduce Confucian doctrine and created a positive environment for Confucianism to reach a higher importance above Buddhism among Vietnamese. His students always paid respect to him because as a teacher he was full of integrity and righteousness. Former students who rose to the ranks of minister or prime-minister, continued to treat him with respect. Students who were invited to visit usually knelt to listen to him. Those who were not good mandarins would be driven away.

He composed poems such as: “Tiểu Ẩn thi tập” và “Quốc ngữ thi tập” but the manuscripts do not exist today.

Generations of Vietnamese have considered Chu Van An as the everlasting teacher for all.  After the revolution in 1945, a tree-lined street and a secondary school, the most renowned in the country, were named after him to commemorate his righteousness and achievement.

Chu Van An’s contributions to the education of the nation

The moral, prestige and capacity of the teacher: Chu Van An identified, the teacher must always be a model of morality, prestige and talent. Throughout his life, he devoted himself to education. With the opening of a private school, he contributed to making the academic atmosphere of the Tran dynasty more active.

Chu Van An determined the task of a teacher. He taught: “Confucian scholar’s obligation is that our success in studying is for the other’s success, merit to people, to give favour for the next life”.

Chu Van An’s opinion about education principle: He always advocated that education was for everyone. Under Tran dynasty some public schools were opened for the sons of royal families by the court. Chu Van An opened private school in his native village for the poor students in order to improve their talents to help the country. Chu Van An got love and respect from his students.

Chu Van An’s opinion about education content: Through his teachings, Chu Van An directed people to a model of kindness and righteousness in their daily lives. He taught his students to respect the workers and be in charge of their life.

He taught his students to be brave, high – minded, abolish what is unjust and be willing to sacrifice for the nation.

Chu Van An’s opinion about education methods: Chu Van An always emphasized the rigor of education for the younger generation. The strictness must first come from the teachers. He confirmed: “Teacher must be strict.” According to Chu Van An “strictness” provides rules and discipline as a model for education.

Chu Van An’s opinion about teaching materials: Chu Van An was always interested in the compilation of materials for learners. Chu Văn An wrote Tứ thư thuyết ước as the textbook for students, but these books have not been found today. He also wrote traditional medicine books, and composed poems. 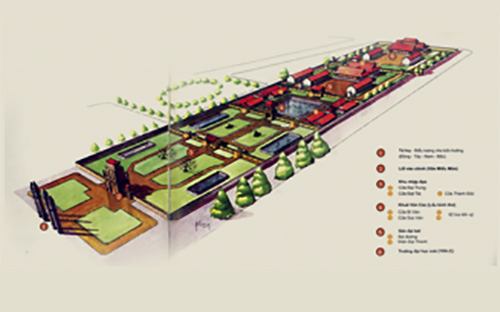